A Legend Leaves Us 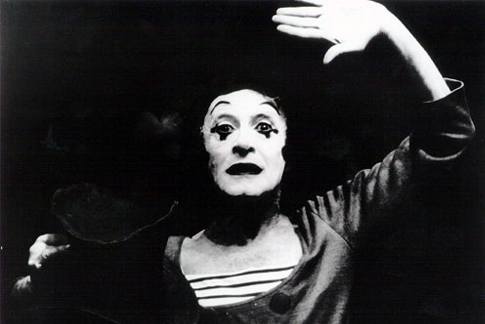 PARIS, France (AP) — Marcel Marceau, who revived the art of mime and brought poetry to silence, has died, his former assistant said Sunday. He was 84.

Marceau died Saturday in Paris, French media reported. Former assistant Emmanuel Vacca announced the death on France-Info radio, but gave no details about the cause.

Wearing white face paint, soft shoes and a battered hat topped with a red flower, Marceau, notably through his famed personnage Bip, played the entire range of human emotions onstage for more than 50 years, never uttering a word. Offstage, however, he was famously chatty. “Never get a mime talking. He won’t stop,” he once said.

A French Jew, Marceau survived the Holocaust — and also worked with the French Resistance to protect Jewish children.

Marceau performed tirelessly around the world until late in life, never losing his agility, never going out of style. In one of his most poignant and philosophical acts, “Youth, Maturity, Old Age, Death,” he wordlessly showed the passing of an entire life in just minutes.

“Do not the most moving moments of our lives find us without words?” he once said.

Prime Minister Francois Fillon praised Marceau as “the master,” saying he had the rare gift of “being able to communicate with each and everyone beyond the barriers of language.”

Marceau was born Marcel Mangel on March 22, 1923, in Strasbourg, France. His father Charles, a butcher who sang baritone, introduced his son to the world of music and theater at an early age. The boy adored the silent film stars of the era: Chaplin, Buster Keaton and the Marx brothers.

When the Germans marched into eastern France, he and his family were given just hours to pack their bags. He fled to southwest France and changed his last name to Marceau to hide his Jewish origins.

With his brother Alain, Marceau became active in the French Resistance. Marceau altered children’s identity cards, changing their birth dates to trick the Germans into thinking they were too young to be deported. Because he spoke English, he was recruited to be a liaison officer with Gen. George S. Patton’s army.

In 1944, Marceau’s father was sent to Auschwitz, where he died.

Later, he reflected on his father’s death: “Yes, I cried for him.”

But he also thought of all the others killed: “Among those kids was maybe an Einstein, a Mozart, somebody who (would have) found a cancer drug,” he told reporters in 2000. “That is why we have a great responsibility. Let us love one another.”

When Paris was liberated, Marcel’s life as a performer began. He enrolled in Charles Dullin’s School of Dramatic Art, studying with the renowned mime Etienne Decroux.

On a tiny stage at the Theatre de Poche, a smoke-filled Left Bank cabaret, he sought to perfect the style of mime that would become his trademark.

Marceau once said that Bip was his creator’s alter ego, a sad-faced double whose eyes lit up with child-like wonder as he discovered the world. Bip was a direct descendant of the 19th century harlequin, but his clownish gestures, Marceau said, were inspired by Chaplin and Keaton.

Marceau likened his character to a modern-day Don Quixote, “alone in a fragile world filled with injustice and beauty.”

Dressed in a white sailor suit, a top hat — a red rose perched on top — Bip chased butterflies and flirted at cocktail parties. He went to war and ran a matrimonial service.

In one famous sketch, “Public Garden,” Marceau played all the characters in a park, from little boys playing ball to old women with knitting needles.

In 1949 Marceau’s newly formed mime troupe was the only one of its kind in Europe. But it was only after a hugely successful tour across the United States in the mid-1950s that Marceau received the acclaim that would make him an international star.

“I have a feeling that I did for mime what (Andres) Segovia did for the guitar, what (Pablo) Casals did for the cello,” he once told The Associated Press in an interview.

In the past decades, he has taken Bip to from Mexico to China to Australia. He’s also made film appearances. The most famous was Mel Brooks’ “Silent Movie”: He had the only speaking line, “Non!”

As he aged, Marceau kept on performing at the same level, never losing the agility that made him famous. On top of his Legion of Honor and his countless honorary degrees, he was invited to be a United Nations goodwill ambassador for a 2002 conference on aging.

Funeral arrangements are not immediately known.

I based a lot of my theatre productions and anyone that works with me on model shoots have an idea of what it means to be “expressive” without words.

You will be missed. May you rest in peace.