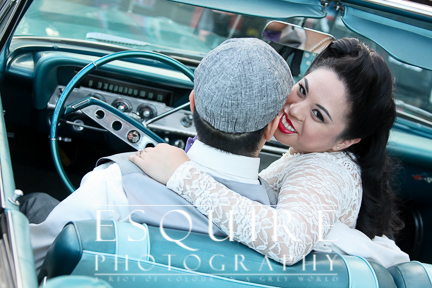 Good afternoon from EPHQ everyone!  As I’m sure you saw earlier today on Twitter & Facebook the fun video I just shared with Ashley & Peter – recapping the totally amazing Engagement Shoot we just did in Huntington Beach on Sunday.

I would have to say though, totally amazing doesn’t even begin to describe the experience we all had.  The entire setting for their Engagement Shoot I would go as far to say was picture perfect.

From the flawless weather & crystal clear blue skies, to the electric energy of the crowds going to the various shops, restaurants & pubs to the local gathering of modified motorcycles, roadsters & a dragster – Huntington Beach over-delivered as a city for their shoot.

We went to some of my favourite spots in Huntington Beach and then eventually to the pier for some wistful photos under the boardwalk and vintage-inspired “Americana” styled portraits in front of Ruby’s Diner.

Oh!  I definitely don’t want to leave out the ’61 Chevy Impala that we were able to use for their Engagement Shoot.  Ashley & Peter totally rocked their portraits with that sweet ride!

Before you scroll down to check out some of my favourite photos from Ashley & Peter’s Engagement Shoot and you would like to chat with me about your event, feel free to contact me anytime day or night.  I’m available just about 24/7 via Twitter, Facebook, Google+, the form on my contact page, or the old fashioned phone as well at 888.ESQ.PHTO (888.377.7486) or 562.225.5915.

PS, I hope you’re having a great start to your week AND totally check out the not one – but TWO WINNERS of the Military Contest – giving away a FREE WEDDING DRESS from Simply Bridal.  Here’s the LINK to enjoy the video announcement.

PSS, Also, if you’re in or have been in the military – check out the EPIC Military Discount Program of 50% OFF.