Neil Young’s PONO. Is It A Lamborghini Or Toyota? Or Too Late? 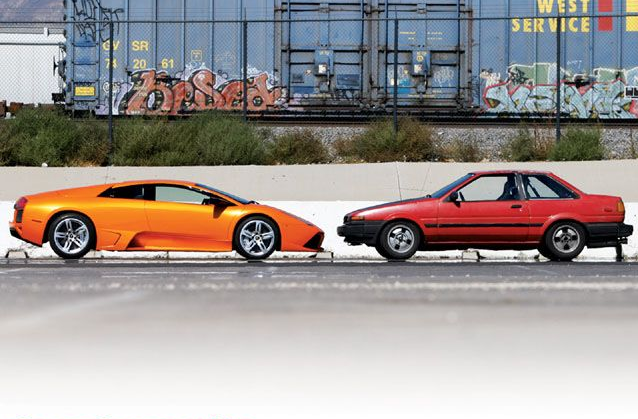 After taking a moment spending some time reading Neil Young‘s Facebook Post about his PONO Music player & service along with many of the comments from the fans & haters, I have come up with this thought.

Which I truly believe crosses over to ALL creative industries and business ventures.

Definitely some interesting points numerous people have shared, but to boil it down to the simplest form; a Lamborghini vs Toyota Corolla. While both essentially do the same, get you from point a to point b, both vehicles deliver COMPLETELY DIFFERENT experiences. And if you think both drive the same, then you basically are numb to any of your five human senses.

Continuing in the simple explanation; if there wasn’t a difference between an apprentice and a master at their craft, then we should all never master ANYTHING we do.

So I guess all of my clients should have hired the copy-cat, music pirating, photo stealing, piece of garbage McTographers instead of me and flying me around the world for a top-shelf experience with award winning photography that’s been published in four languages.

Plus – we all know any jackass that buys a camera is magically transformed into a professional. Shit – for that matter, my iPhone takes the same quality photos as my professional Canon DSLRs & Leica Camera rangefinders with near perfect optics. Heck, I should probably go with the most compressed file format for my photos too. Because we all know the smallest JPEG has so much more of the image to work with than a RAW file.

Or, let’s say you have a heart attack (which I have had), you sure as hell don’t want some C-average, borderline flunking out of college person working on you. I know I didn’t & had one of the best doctors in the country at one of the best hospitals in the world working on me.

If there wasn’t a difference in the dynamic range of headphones then I guess I (like the hundreds of thousands of others AND professional recording artists around the world) should NEVER buy Westone Music Products. WTF were all of us thinking spending all that money on a pair of headphones that are just as good as the $9.99 headphones I can buy at a gas station.

If there wasn’t a difference between the crappy, blown out speakers in a cheap ass movie theatre then the D-BOX system in the UltraLuxe Anaheim Cinemas at the Anaheim GardenWalk is a total waste.  To add to that thought then clearly the people at D-BOX, Anaheim Gardenwalk and the myriad of others involved in the purchase of that system (or many, many others around the world) was clouded in their judgement.

One could even say that George Lucas and the rest of the professionals at Skywalker Ranch are completely off their rockers perfecting the expansive dynamic range of their sound editing, creating and playback abilities.

At the end of the day, if you can’t afford the PONO Music player, or it’s service or the albums, or you don’t see the “value” in it, or purely don’t want to re-purchase your entire library of music, that’s totally cool.

But to flat out say “you don’t hear a difference” therefore the product is worthless, stupid, etc., etc., etc. only shows you don’t have a trained ear, could have hearing loss or are just plain ignorant to the various qualities of products.

Even myself, while this is a product that I don’t own yet, am still, at the end of the day a hearing impaired person who was born deaf in my right ear and still can totally hear the difference between lo, hi and master quality sound.

NOW WITH ALL THAT SAID…

@ Neil Young & the rest of the professionals at PONO Music, where was this product 5, 10 or even 15 years ago? Seriously, this is a product that should have been introduced when the late Steve Jobs brought about the MP3 for the iPod. Where the hell was the complete polar opposite product for MANY artists, musicians, audiophiles and music lovers in general that could have purchased and enjoyed?

I, like many other people I know and I’m sure millions of others around the world that I don’t know, have been frustrated, disappointed, let down and to be even more blunt; saddened nobody who had the financial liquidity to invent, create, and mass produce a product like this – did.

While I don’t know your reasons or reasons any others would have had in the music industry – the critical thinking, deductive and logical CEO mind inside of me boils it down to money.

The MP3 “revolution” was embraced with greed. It was a quick & easy way to get music out to the masses, while keeping the costs down. Now look where the music industry and the retail industry is at: dead, flat, broke AND for many; OUT OF BUSINESS.

Where are two of the best music retailers: Virgin Music, Tower Records? Out of business. Where is Warehouse Music? Gone. In Los Angeles, there is Amoeba Music, but not everyone can walk, drive, bus or fly to LA to go record, tape or CD shopping.

Instead, they just “rent” music on Spotify, Apple Music, Google Play, Amazon Prime Music and more or on the occasion – they’ll buy a CD. Wow.

Now here we are. A music industry that is one foot in the grave & on life support for a myriad of reasons. Stemming from the over-use of shitty auto-tune, over-saturated layers, and pathetic uneducated people engineering the music. To make it worse – the music industry (and for the most part; ALL creative industries) are filled with people who the creative talent of a glass of lukewarm water.

Combined with a global society with a hyper self-entitlement like no generation before, has been raised on MP3s, doesn’t care about the quality of products & services and/or actually can see the value in quality products & services (which we both know is a matter of perception) and a generation of music pirates who can’t possibly bring themselves to buy an album, let alone one $.99 cent song – you’re all screwed.

It shows in the revenue and it’s obvious in the people who are creating. There is more “shit” being created today in any and ALL creative avenues than there ever has. Again, just because someone bought a camera doesn’t mean they’re magically transformed into a professional photographer. Nor if I buy a flute today, will the Los Angeles Philharmonic hire me tomorrow.

Sadly, this could be a product & service that’s a “day late” and from what you and the media all around the world are sharing; “a dollar short” too.

If you and your team are not able to take the $6,000,000 that was raised and really kick ass on a global sense – Pono Music will be nothing more than a dull grey memory of “that rock & roll guy” who failed at a great product & service that was bashed by haters saying I told you so.

Neil, I totally commend you for what you’re doing and I think I’m speaking for many people around the world, but we so desperately wish you did it sooner.