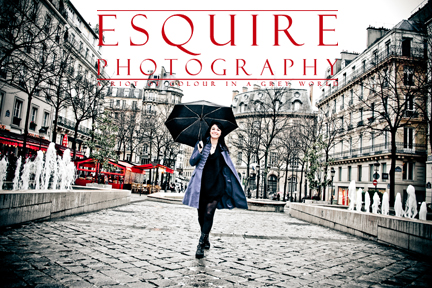 As I’m sure you’ve seen on Twitter & Facebook, 2011 was bursting at the seams with Engagement Shoots, Portraits and Weddings I photographed from Newport Beach down to San Diego and all the way up to Oakland.  There was even the Military Promotion that went on throughout the end of 2011 and the Workshop I taught with my good friend & fellow photographer Danny in Paris, France.

AND, now the absolutely AMAZING Valentine’s Day Promotion I’m running through the ENTIRE Month of February taking 50% OFF all my services.  Totally check it out!!

Ok… Now that you have an idea of a couple of the many things going on at Esquire Photography HQ in Newport Beach, I have to share with you Emma’s model shoot in Paris, France.

I first met Emma when I was in Paris, France with my friend Danny at the WOS Bar just down the street where he and I were staying.  Danny & I were hanging out at the WOS Bar having our daily consumption of pints when I asked Emma if she would like to model for us.  She slightly paused for a moment & happily said yes she would love to.  So from there – it was just a matter of picking the day for us to capture some awesome portraits of her and decide on where we would like to do her modeling portraits too.

When the day arrived for Emma’s model shoot, we obviously met up at the… you guessed it… the WOS Bar.  YEAH!!!  We chatted for a few moments to catch up on things, round up our gear and clothes & headed out for some totally epic street shooting.  As we found our way through the streets of Paris, there was an overflowing veritable cornucopia of spots to photographer her at.  From the totally MEGA buildings, to the cinema & then of course the Pantheon.

If you don’t know much about The Pantheon in Paris, France – check this out!  The Pantheon was originally built as a church dedicated to St. Genevieve, but after many changes now combines liturgical functions with its role as a famous burial place. It is an early example of Neoclassicism, with a facade modelled after the Pantheon in Rome surmounted by a dome that owes some of its character to Bramante’s “Tempietto”.

Fast forward time… I’m back in Newport Beach photographing events like a crazy person (as to be expected!) and in the little bits & pieces of free time, I’ve been chipping away at Emma’s modeling shoot.  And now it is READY!!!!

BUT!  Before you scroll down and you’re thinking…  Hey – I’d really like to get to know this Newport Beach Photographer (Previously a Huntington Beach Photographer) who loves music & fashion, photography and art, feel free to contact me anytime.  Perhaps you’re a fan of Nachos & Newcastles (like Duran Rex and I) & if so – we could always meet at Fred’s Mexican Cafe on Main & PCH in Huntington Beach.  They’re out of this world at Fred’s!

I hope you’re having a great week and stay tuned for some amazing events that I’m sharing.  From San Diego to Newport Beach, Ventura, all the way up to Oakland AND Paris, France & Berlin, Germany – I’ll have some fantastic Weddings, portrait photo shoots and events that I’ve had the honour of photographing.  And of course soon to come; LA Fashion Week, the VIP Party Manny “Pac Man” Pacquiao had at The Supper Club in Los Angeles and the American Music Awards Pre-Party at Ben Kitay Studios with Kate Mesta.

UBER PS!!!  The awesome rock star Client Concierge; Linda & I have been putting something together that is probably one of the BIGGEST THINGS this Newport Beach Wedding Photographer has EVER done in nearly 29 years.  I can’t say more yet, but let me just go on record & say – that if you’re getting married & love instant gratification – you will WANT TO KNOW about what Esquire Photography IS DOING!

PSS, Check out this awesome quote I shared on Twitter & Facebook keeping the “Butterfly Effect” moving forward – spreading positivity.  It’s a totally new one & I really think it is so very true.  “All our DREAMS CAN COME TRUE, if we have the courage to pursue them.” – Walt Disney