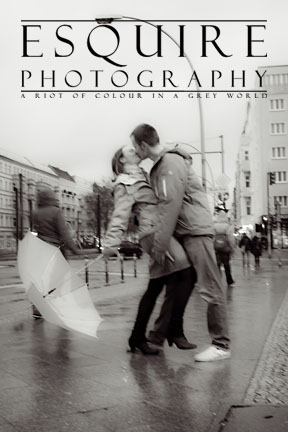 Good afternoon from Orange County everyone!  I’m one Newport Beach Wedding Photographer who has a VERY SPECIAL TREAT for you. What I’m referring to is Christin & Christoph’s Portrait Photo Shoot I photographed of them in Berlin, Germany.  YES!  You read that right – Berlin, Germany.  WHEW HEW!!

I’m sure you had seen from me on Twitter & Facebook I was wrapping up 2011 with my Workshop I taught with my good friend & fellow photographer Danny in Paris France and then hopped a plane with my BFF & MEGA East Coast Photographer; Valerie to Berlin, Germany. Where I received the royal treatment of hospitality from my new friends, the cooks tour of Berlin from Valerie and a Portrait Photo Shoot of Christin & Christoph.

Valerie & I arrived at Graffiti Heaven U-Bahn station after an amazing boat ride on the Spree River through Berlin earlier that afternoon with friends.  Since we were a little early, Valerie introduced me to Curry Wurst, which is ahhhhhfreakin’mayyyyzeeeeng!  Once we enjoyed our Curry Wurst, we met up with Christin & Christoph for their Portrait Photo Shoot and that’s when the fun began.

Graffiti Heaven in Berlin, Germany is a photographer’s dream come true for photo shoots!  Everywhere we turned there was an exquisitely painted wall, building, debris, misc and random items that would be out of place anywhere else – was perfectly in symbiotic harmony at Graffiti Heaven.

The weather was perfect for Christin & Christoph’s Portrait Photo Shoot as it drizzled from time-to-time, but yet gave me the best light to have fun with them & capture their portraits.

What also made their portrait photo shoot special for me was I shot all their portraits with my totally manual operation Leica M8 and a vintage 35mm lens from 1958.  Having to slow down a bit gives me the opportunity to capture few photographs that are much more accurate along with having the ability to utilize a lens that’s far more superiour to anything from Canon & Nikon.  Basically I was using the best of German engineering for camera equipment in Berlin, Germany.  How cool is that!?!

Before you scroll down to check out Christin & Christoph’s Portrait Photo Shoot I photographed of them in Berlin, Germany and you’re thinking… Hey – I’d really like to get to know this Newport Beach Wedding Photographer (Previously a Huntington Beach Wedding Photographer) that loves music & fashion, photography and art – feel free to contact me anytime.  Perhaps you’re a fan of Nachos & Newcastles (like Duran Rex and I) and if so – we could always meet at Fred’s Mexican Cafe on Main & PCH in Huntington Beach.  They’re awesome there!

PS, Check out this awesome quote I shared on Twitter & Facebook recently keeping the “Butterfly Effect” moving forward – spreading positivity.  I really think it is so very true.  “Your time is limited, so don’t waste it living someone else’s life.”  Steve Jobs