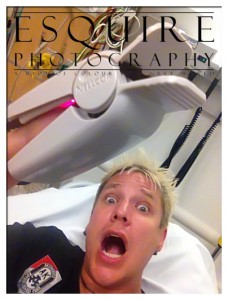 I was en route to Pictage to pick up the movie poster for “Here & Now” that I’m the Director of Photography AND Co-Director with Markus Redmond to take to the beginning of filming that was supposed to happen yesterday.  But unfortunately, my life was given a turn of events as I was smashed in a rear-end car accident when I was stopped in heavy traffic.  With a car in front of me, to the left of me & right of me – I had nowhere to go, other than to witness just a split second before it happened a car barreling down on me from behind & then slamming into Rio (my brand new 2012 Mini Cooper S).

There is something surreal to witnessing what is about to happen to oneself & there being absolutely nothing to change the outcome.  In a way, it’s a flash of events in one’s life, along with so many other emotions that flood through a person.  For me, it was sheer terror as I didn’t want to get hit, I didn’t want my car to get damaged, me hurt, hit the person in front of me & my calendar to become obliterated because of what was about to happen.

Well, the worst did happen and Rio was smashed, the contents of my car and myself tossed about and my body sustained injuries – enough to cause shooting pain down my left leg and my left leg & left arm to go numb.  Not exactly a good thing for anyone, let alone me – a professional photographer & filmmaker who’s always on his feet and using his hands.

Eventually through all the mess, information was exchanged between me & the guy who plowed into me, Rio was put on a flat bed truck my insurance company arranged for & taken to Caliber Collision Center in Costa Mesa where Justin was very pleasant taking care of me, Enterprise gave me a minivan to use which I endearingly now call my “Swaggin’ Wagon” and I then made my way to Hoag Hospital – just down the street from the Caliber & Enterprise.

As you saw with my updates on Twitter & Facebook, I was at Hoag Hospital for numerous hours & eventually released to go home under strict orders of rest and to keep a constant watch on my injuries in case they were to not get better or go the other way & get worse.

Well, me being me, I had my iPhone at hand & happened to capture a few photos while I was in the waiting room and a video of my thoughts when I was admitted to a room to get checked out by a team of awesome doctors.

The video is a quick brain dump of my thoughts screaming out in my mind and heart encouraging you to not take life for granted, not take people in your life for granted and live your lives, tell those you love how you feel and do NOT wait until tomorrow, because tomorrow never comes.

I have an acute sense of knowing life can be instantly ripped out from under you and stripped from the grip of your fist.  But I also know that with the many additional chances I’ve been given in life – I also have an acute sense of knowing how precious life is and refuse to take it for granted.  Refuse to let it pass me by.  Refuse to sleep my life away.

With all that said, I want to leave you with a favourite quote from the movie; “The Replacements” starring my favourite actor; Keanu Reeves and that is: “Pain Heals. Chicks Dig Scars. Glory Lasts Forever.”

After  you watch my video, go out, tell someone you love them & starting here & now – go live your life as it was intended to be lived.

PS, I watched an awesome video tonight of “The Greatest Speech Ever Given” and I totally felt that I should include it with my video as well.