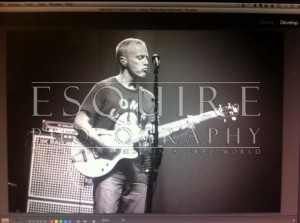 Good morning from overcast Orange County everyone!  This is one super excited Newport Beach wedding photographer that hopes everyone had a terrific “TRex Tuesday” yesterday.

Speaking of – be sure to pop over to my Facebook Fan Page for some of the latest antics with Esquire Photography’s mascot; “Duran Rex.”  He’s definitely been Getting Silly with everyone lately, especially the ladies – he’s quite the charmer and it’s pretty obvious in his smile showing off his pearly white chompers.  HeHe!

Ok… back to the West Coast Wednesday Video Of The Week.

If  you had recently seen on either Facebook or Twitter this past Saturday, I was sharing some really fun photos (like the funky one of Curt Smith in this post) from the Tears For Fears concert I attended with my good friend; Carri, her BFF Kai & Carri’s other BFF and a new friend for me; Andye at the Wiltern Theatre in downtown Los Angeles.

If you’re not too familiar with Tears for Fears, check out their history from Wikipedia:

“Tears for Fears are an English new wave band formed in the early 1980s by Roland Orzabal and Curt Smith.

Founded after the dissolution of their first band, the mod-influenced Graduate, they were initially associated with the New Wave synthesizer bands of the early 1980s but later branched out into mainstream rock and pop, which led to international chart success.

Following the release of their third platinum-selling album, The Seeds of Love (1989), Smith and Orzabal parted company, though Orzabal retained the Tears for Fears name throughout the 1990s. The duo re-formed in 2000, and released an album of new material in 2004. To date, Tears for Fears have sold over 24 million albums worldwide, including more than 8 million in the U.S.”

Uhmm… Yup.  I think they’ve got quite an amazing history of success in their career.  Plus you might remember the amazing experience I had when I met Curt Smith earlier this year at a private concert for Brit Week the British Consulate put on at the Whitefire Theatre.  He knew who I was!  But more amazing to me – Curt knew who I was as “Esquire Photography” – which is so much more meaningful to me.  Wholly Nachos & Newcastles!

Plus, that was when it was proven to me that sharing our experiences is awesome.  After the concert at the Whitefire, I received a note from Carri telling me how much it meant to her that I was sharing the photos & captions of the event, because she wasn’t able to be there.  Which is the whole reason why I love to share with others through photos & words online – as we’re not able to be at events that we would like to at times.

So feel free to sit back with your favourite morning “beverage” and enjoy “Shout!” by Tears for Fears for your West Coast Wednesday in Newport Beach, Huntington Beach or another part of this crazy world we’re all a part of.  Also remember to keep the “Butterfly Effect” happening and make it a totally positive one for someone else too – cheers!

PS, I just keep hearing a quote resonating in my head I recently shared on Twitter.  I think it says where my head is at with the “Butterfly Effect” moving forward – spreading positivity.  “I never wanted to be a businessman, I just wanted to change the world.” Richard Branson.