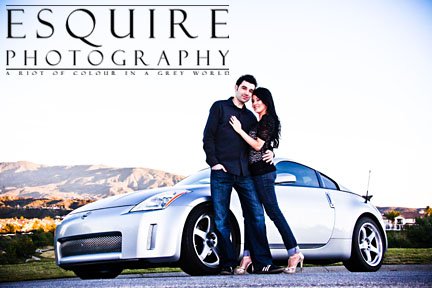 As I’m sure you’ve seen on Twitter & Facebook, 2011 was bursting at the seams with Engagement Shoots, Portraits and Weddings I photographed from Newport Beach down to San Diego and all the way up to Oakland.  There was even the Military Promotion that went on throughout the end of 2011 and the Workshop I taught with my good friend & fellow photographer Danny in Paris France.

AND, now the absolutely AMAZING Valentine’s Day Promotion I’m running through the ENTIRE Month of February taking 50% OFF all my services.  Totally check it out!!

Ok… Now that you have an idea of a couple of the many things going on at Esquire Photography HQ in Newport Beach, I have to share Delicia & Allen’s story about their Engagement Shoot.  Trust me, it’s definitely one you’re gonna say.. NO WAY!

A few months ago, we had scheduled a date to do their Engagement Shoot and all of us were totally jazzed to do it and I was really fired up Allen was going to bring his car to include in their portraits.  I totally get that too as I’m sure you’ve heard me go on & on about Rio.

Their day rolls up for their shoot & let me just say that well… one thing led to another with bad weather conditions, some of the worst traffic I’ve experienced ever in Southern California – taking nearly 4 hours to drive a 90 minute commute to the location, and by the time it was supposed to happen – the time & opportunity had passed.  For me, it seemed that the more I pushed harder & harder to get to them from the American Music Awards Pre-Party at Ben Kitay Studios with Kate Mesta, the worse the traffic got.  So at that point, I remembered what Albert Einstein said; “All great forces in nature & life will have equal and opposite forces working against it to keep it from happening.”  Of course, being a blonde it’s probably not 100% accurate word for word, but that is the message in it.

Since I’m a totally MEGA huge believer in things happen for a reason, I viewed all the opposition as a sign that when we did do their Engagement Shoot – it was going to be one for the books.

Fast forward to last Saturday when we all met up for their Engagement Shoot in Temecula and it was everything I could have dreamt of AND MORE!

From the casual and playful photos we captured at the entrance to a private country club, to the opulent photos with Allen’s sick ride and me nearly getting run over a few times laying in the street shooting (Allen is my hero & saved me from one of the drivers that got uncomfortably close!) – Delicia & Allen’s first 1/2 of their Temecula Engagement Shoot was a complete success.

For the second 1/2 of their Engagement Shoot, we hopped in our cars & popped over to a local mall with tons of incredible textures giving me an awesome and diverse collection of opportunities to capture some of my Signature Night Romantic Portraits of them too!  AND — Security didn’t give us any trouble either.  Can I say I love Love LOVE it!!!

So if you’re thinking…  Hey – I’d really like to get to know this Newport Beach Wedding Photographer (Previously a Huntington Beach Wedding Photographer) who loves music & fashion, photography and art, feel free to contact me anytime.  Perhaps you’re a fan of Nachos & Newcastles (like Duran Rex and I) & if so – we could always meet at Fred’s Mexican Cafe on Main & PCH in Huntington Beach.  They’re out of this world at Fred’s!

PS, I have an absolutely and totally MEGA Valentine’s Day promotion going on this month.  If you thought the Military Promotion was HUGE, click this LINK & you’re gonna love it!

PS, Check out this awesome quote I shared on Twitter & Facebook keeping the “Butterfly Effect” moving forward – spreading positivity.  It’s a totally new one & I really think it is so very true.  “All our DREAMS CAN COME TRUE, if we have the courage to pursue them.” – Walt Disney