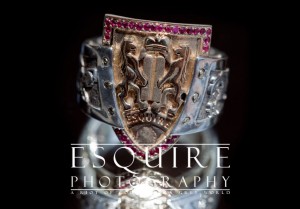 Good evening from Huntington Beach everyone!  Have I got a yummy treat for you.  If you’ve been following me on Twitter or on Facebook back over the July 4th holiday- you would have seen some updates that came through when I was on location for a jewelry shoot for F & C Creations in downtown Huntington Beach.

Now I’m guessing you’re probably having the same reaction that others have had like; “Huh?  A jewelry shoot on location?” or “Wouldn’t you want to have a jewelry shoot in a studio?”  My answer to the two most common questions were; “Yes” and “Yes and No.”  As an artist and a photographer I’m constantly seeing things in a way that isn’t mainstream to the average person.  And on top of that, I see a universe in the smallest things like a tile in the entrance of a retail store or the gradient in a cross walk.  Or better yet – a man hole cover with crushed glass.

Also, if you’re not too familiar with F & C Creations, it is the brainchild of Stephen Arnold.  Who, in my opinion is literally THE Best jeweler I have ever had the honour of working with.  And, I mean EVER.  We first met at a Bridal Showplace event last year where I was blown away in his genius of his work.  Since then, we kept in touch here & there, but never quite connected.  So when I received a call from Stephen that he wanted me to photograph his work, I immediately and without hesitation gave him a resounding YES.

AND!  What made the entire process that much more incredible for me is that I hired him to create a newer more modern redesign of my Esquire family ring.  I have a photo of it above & here is one of the Photos from the shoot during our Nachos-inspired lunch break.

I asked Stephen if he could share with you some of his background and he put together a fantastic Biography to share with you.  Check this out!

All his life, Stephen has had a passion for art and jewelry.  With a strong art background in oil painting and illustration, jewelry design came naturally to him.  He started training as a silver smith when he was just 16 years old, learning how to solder, cast, finish, and wax carve over the next two years.

Stephen continued to work on jewelry (mainly as a silver smith) until he enrolled into the Gemological Institute of America in Carlsbad California.  He enrolled and excelled in the Graduate Jeweler and jewelry design programs.  While still enrolled, Stephen worked full time as bench jeweler in Pacific Beach as the “custom design jeweler.”

Immediately after GIA, Stephen took on a very rigorous and difficult apprenticeship at San Diego’s premier retailer Charles Koll Jewelers.  It is there that Stephen learned the true meaning of quality craftsmanship, combining old world techniques with the latest in jewelry manufacturing technology under the strict observation of a master jeweler whose view of craftsmanship went only two ways; it was ‘bad’ or it was ‘perfect’.

Stephen would later voluntarily leave his apprenticeship to work for Niessing, a German jewelry designer and manufacturer and a pioneer in modern, minimalist European design.  Stephen found himself sitting side by side with German goldsmiths and stone setters as part of his ongoing training to be able to work on the unique and high quality designs.   As Niessing’s goldsmith for their North American operation, he executed all repairs and stone setting for their retail accounts.  While working there, Stephen spent his free time experimenting with his own designs.

The influence of and European modern design inspired Stephen to create a jewelry company that could bridge this influence with traditional American glamour.  Steering away from traditional American over load of pave stones, frills, and lace as well as adding more dimensions to the hard architectural designs of European Modern, Stephen has created F and C Creations, a true American contemporary artist.  Art combined with simple shapes, art you can wear.

By now I bet you’re dying to see the photos from the shoot & since I know no other way other than to go 100% or go home – I’ve put together one of my delicious slide shows from the photo shoot on location in Huntington Beach.

But before you check out the slide show and you’re thinking to yourself…  Hey – I’d really like to get to know this Orange County Wedding Photographer in Huntington Beach, California loves to capture all the amazing details in jewelry, feel free to get in touch with me anytime.

I hope you’re having a great start to your week & check back very soon.  I’ll have some scrumptious photos to share with you from Merelin & Arthur’s wedding this past Friday & Erin & Kevin’s wedding on Saturday – cheers!