The Hazards Of Texting And Driving – An Urgent Public Service Announcement

Good evening everyone!  Let’s say you’ve been driving in your car enjoying your favourite song on the radio and just got a note on your iPhone or Crackberry from a friend of yours.  If you’re like me, you’re thinking – eh, it’s only a quick text and I’m paying attention to the road, so it’s all good.

Let me ask you a quick question about the following picture.  Do you see the motorcycle? 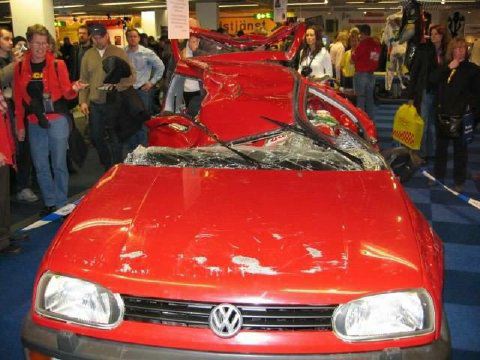 At first glance, probably not.  Let me show you another picture & see if you can find the motorcycle now. 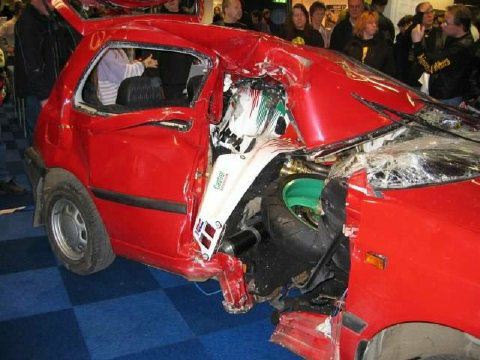 If you are like me, you’re thinking – well I see a tire in the wreckage. 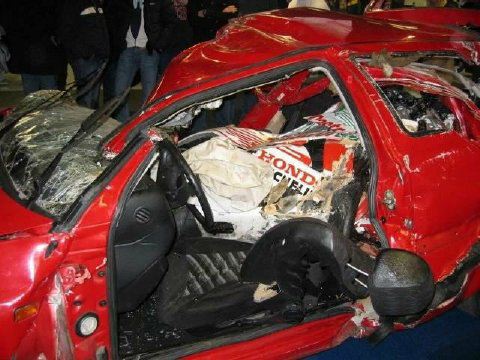 In that photo, I saw what appeared to be a body of a motorcycle in the cockpit of the car.

Ok, how about in the next one, do you see it here?

Now do you see it?  When I first looked at this last picture, I was in complete disbelief and thought that it had to be a gag done by the police department or something else.  This thought was fleeting until I read the following true information about the accident.

The  Honda crotch motorcycle rider was reported to be traveling at approximately 85 mph.  The VW driver was talking on a cell phone when she pulled out from a side street, apparently not seeing the motorcycle.  The riders reaction time was not sufficient enough to avoid this accident.

The car had two  passengers and the bike rider was found INSIDE the car with them.  The Volkswagen actually flipped over from the force of impact and landed 20 feet from where the collision took place.

All three involved (two in the car and the bike rider) were killed instantly.  This graphic demonstration was placed at the  Motorcycle Fair by the Police and Road Safety Department.

Pass this on to car drivers or soon to be new drivers, or new motorcycle owners AND ESPECIALLY EVERYONE YOU KNOW WHO HAS A CELL PHONE!!!!!

A  picture is worth a thousand  words.

As an avid Ducati rider, I can honestly say that I personally have had my share of

That last one also happens a LOT more around the holidays near the shopping centers.  So if you’re holiday shopping, keep an eye out for that one.

What’s sad is those are only the first three that come to mind as I’m sharing this with you.

Now granted, there is the other side of the coin where there are a LOT of really stupid motorcycle riders out there.  But the thing is (and there’s numeric proof) that the number of riders that are idiots are less than 15% of us out there riding.  The majority of us (like me) ride because like surfing, it’s in our blood & it’s a way of life.

I’ve even got to the point of researching helmet cams to wear as I’m riding to I can start a website to share with everyone that there needs to be more awareness on the road.

Oh!  And, I just remembered that a few weeks ago when I went down to South Coast Plaza to run a couple of errands, I saw a total of 6 rear-ender accidents on the way to the mall from my home and a really horrible one in the middle of an intersection on my way back.  All 7 of these I saw with a 2 hour period from Huntington Beach to Costa Mesa and back.

Were those rear-ender accidents the result of texting while driving?  I don’t know, but that did seem to be quite a few in less than a 12 mile distance each way.

Well… Now that I’ve gone on & on gabbing about this and you’re thinking; Hey! I’d really like to get to know this passionate Ducati riding, Orange County Wedding Photographer in Huntington Beach, California. Feel free to Contact Me on the Website or send me an email direct at david@esquirephotography.com.  You can also stay in touch with me in “real time” on Twitter, Facebook and my Facebook Fan Page too.

Thanks so much for taking the time to read this & I’m signing out for now.  I need to finish getting ready for Anna Marie & Lee’s 2 day Los Olivos Wedding at the Firestone Vineyard.  I’m leaving tomorrow at 6:00 a.m. and it’s already after 10:00 p.m. – cheers!

PS, if the previous photos weren’t enough for ya, check out what was released in August in the UK about texting and driving.  Warning!  This is NOT for the weak stomach.