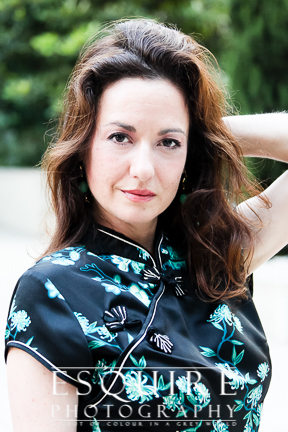 Good afternoon from EPHQ everyone!  As I’m sure you’ve seen on Twitter & Facebook the I had the honour of working with Melissa Kite again.

I’m sure you remember Melissa from the award winning movie: “Skyfell (And I Can’t Get Up)” we worked on together for The Toscars hosted by Brits in LA.  Melissa was nominated for “Best Whactress” as “B.M.” while I had the honour of being the Still Photographer & a cameo as well!

Since she & I worked together on Skyfell, we’ve been trying to connect to do another photo shoot.  Well our calendars finally aligned & last week we headed to downtown Los Angeles and let me tell you – she totally rocked her photo shoot.  We started at the Los Angeles Library, which is next to The Standard LA & from there, hit some of my favourite locations along with The Westin Bonaventure Hotel & Suites where the movie: “True Lies” was filmed with Arnold Schwarzenegger.

What made Melissa’s photo shoot & filming more unique than others I’ve done in the past is I wanted to incorporate three technologies.  I wanted to use my traditional Canon DSLR, my Nokia 808 Pureview AND the latest technology; Google Glass (I’m one of the chosen Glass Explorers).  What’s crazy is using my Nokia 808 Pureview and Google Glass on Melissa’s photo shoot today would have been like using my Canon DSLR 50 years ago!

ALSO! I’m excited to share with you that I was able to license another song from Moby.  Can I say WHEW HEW!  The soundtrack in Melissa’s video is: “The Day (Gesaffelstein Remix)” which has the perfect blend of synth-pop and EDM that I was looking for.

Before you scroll down to check out my some of my favourite photographs from Melissa’s photo shoot captured on a traditional Canon DSLR, my Nokia 808 Pureview and the most advanced wearable computing device; Google Glass and you’re thinking you’d like to chat about your project or photo shoot, totally comment below or contact me anytime day or night.  I’m available just about 24/7 via Twitter, Facebook, Google+, the form on my contact page, or the old fashioned phone as well at 888.ESQ.PHTO (888.377.7486) or 562.225.5915.

I hope you’re having a great weekend AND STAY TUNED for Christin & Christoph’s wedding in Mirow, Germany very soon.  There were over 10,000 photos captured during the week that I was in Germany & I’m so excited to share them with you.

« Esquire Photography Partner; Simply Bridal Has An Awesome Wedding Tip To Help Make The Most Out Of Your Wedding DayI’m One Destination Wedding Photographer Honoured To Share Christin & Christoph’s Wedding At The Strand Hotel In Mirow Germany »