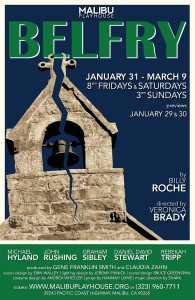 Good evening from EPHQ everyone!  As I’m sure you saw on my Facebook & Twitter updates last night, I had the honour of working with Mr. Gene Franklin Smith, the Creative Director at the newly refurbished Malibu Playhouse as their event photographer for the SOLD OUT Red Carpet opening night of; “Belfry” by renowned Irish playwright: Billy Roche.

“Belfry” is the story of Artie O’Leary; a lonely, middle-aged man who lives with his invalid mother and works as a sacristan in the Catholic church in small-town Wexford.

He falls in love with Angela, the married woman who changes flowers at the church, and when he kisses her after the birthday party for a troubled altar boy, their passionate affair in the church’s belfry begins.  Artie’s life changes for the better, until a stunning betrayal tears he and Angela apart.

This is the West Coast Premier directed by Veronica Brady had an industry who’s who guest list of Julia Duffy & Patrick Dempsey and many more along with a totally MEGA all star cast including Rebekah Tripp, Daniel David Stewart, Graham Sibley, John Rushing and Michael Hyland.

Plus!  If Gene’s name sounds familiar, it’s because I had the awesome opportunity of working with Gene on the award winning movie: “Skyfell (And I Can’t Get Up)” for The Toscars hosted by Brits in LA.  Gene was nominated for “Best Whactor” as “James Blond” and I had the honour of being the Still Photographer & a had a walk-on cameo as well!

Before you scroll down to check out the video of some of my favourite photos from the event last night and you’re thinking…  Hey – I’d really like to get to know this Newport Beach Photographer who loves the arts, feel free to contact me anytime.  I’m available just about 24/7 via Twitter, Facebook, Google+, the form on my contact page, or the old fashioned phone as well at 888.ESQ.PHTO (888.377.7486) or 562.225.5915.

I hope you’re having a great week AND totally check out Christin & Christoph’s Destination Wedding I photographed in Germany.  There were over 10,000 photos I captured during the week I was in Germany & I’m so excited to share them with you!

PS, Be sure to follow me on Twitter & like me on Facebook to keep up with my next adventure.  I’m being flown down to India in 72 hours to film & photograph Shriradha & David’s wedding! WHEW HEW!

PSS!  Check out my exclusive Esquire Photography iPhone Cases featuring original photographs from around the world.  I just released them this past week.

« I was featured on Skip Cohen University Discussing “The Homogenization and Commoditization of Photography”How To Make The Most Out Of Your Wedding Day By Saving 15% On your Wedding Dress, Veil, Jewelry And More From Simply Bridal! »