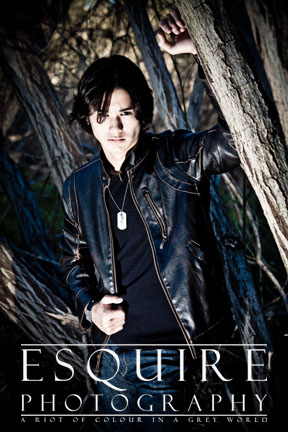 As you’ve seen from all the zaniness on Twitter & Facebook – 2012 is bursting at the seams with Portraits, Engagement Shoots and Weddings I’m photographing from Newport Beach down to San Diego and workshops & shoots all the way out to London & Berlin.  Not to mention that I got hired on as a Director of Photography AND Co-Director with Markus Redmond on an upcoming movie; “Here & Now” starring Jasper Cole, Bobbie Phillips & many more.

Ok… Now that you have an idea of the many things going on at Esquire Photography HQ in Newport Beach, I have a completely amazing photo shoot to share with you that I recently did at a private location for celebrity designer; Kate Mesta.

As they say in the movies, I’m going to cut to the chase.  The photo shoot we did was for Kate Mesta’s BRAND NEW LINE and Boo Boo Stewart’s PERSONAL LINE of dog tags and jewelry he’s launching with Kate Mesta.  YEAH!

We had quite the line up for the shoot too.  Obviously Boo Boo Stewart; martial arts master, stuntman in films, including Beowulf and movie star for the epic series; The Twilight Saga.  Boo Boo has 3 sisters. He toured with two of his sisters, Maegan Stewart and Fivel Stewart, when he was in a band “Echoes of Angels.”  As well as being able to sing, he can also dance.  In 2004, he appeared in Eminem’s ‘Just Lose It’ video and, in 2007, toured with Miley Cyrus during her Best of Both Worlds Tour.  Totally MEGA!

We also had the totally chill & fun to be around; Ms. Brittany Curran who was just featured with Kate Mesta last week in her Exclusive Laguna Beach Photo Shoot.  She’s one of the premiere young actors in Hollywood today.  She’s began her film & television career on MADtv (LOVE IT!!!) along with feature film: “13 Going on 30” with Jennifer Garner, “Ghost Whisperer” with Jennifer Love Hewitt, “Shark” with James Woods and most recently as the daughter of Ray Romano on the critically acclaimed; “Men of a Certain Age.”  Uhhhhmmm, yeah – she’s rocking it!!

I also want to give a shout out to Maegan Stewart and Fivel Stewart; Boo Boo’s two sisters along Makena & Dylan from the Kate Mesta Krew along with all the incredible people that made the photo shoot for Kate Mesta a total success.  You’re all totally MEGA!!!

So if you’re thinking…  Hey – I’d really like to get to know this Newport Beach Photographer (Previously a Huntington Beach Photographer) who loves music & fashion, photography and art, feel free to contact me anytime.  Perhaps you’re a fan of Nachos & Newcastles (like Duran Rex) & if so – we could always meet at Fred’s Mexican Cafe on Main & PCH in Huntington Beach.  They’re out of this world at Fred’s!

I hope you’re having a great start to your weekend and stay tuned for some amazing events that I’m sharing.  From San Diego to Newport Beach, Ventura, all the way out to London, England, Paris, France & Berlin, Germany – I’ll have some fantastic Weddings, portrait photo shoots and events that I’ve had the honour of photographing.

PS, Be sure to check back this Sunday because Reverend Sandra from Visions & Promises Event Planning & I have a VERY HUGE announcement that’s surely to blow you away!