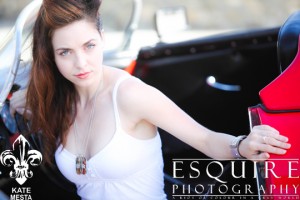 Good evening from Esquire Photography HQ in Newport Beach everyone!

I’m a Newport Beach Photographer who’s coming off the fun of photographing Indre & Pele’s Newport Beach Wedding (iPhone sneak peek on my Facebook Page) on the Athena yacht from Electra Cruises on my BDay on Thursday (who you I’m sure remember from their Engagement Shoot) and spending the past two days in post production working on the the latest commercial shoot for Kate Mesta I just photographed for her in Laguna Beach on Wednesday featuring Ms. Brittany Curran.

Just in case you’re not too familiar with Kate Mesta, check this out!

Kate Mesta creates all of her jewelry in Laguna Beach, California.  Every piece of Kate Mesta’s work is a one of a kind piece of art to wear. Her work has been featured in many celebrity events. Kate Mesta is inspired by the fashion industry and attends many events to keep her line very fashion forward.  She has a great sense of style and creates each piece to be a unique work of art to wear.

Over the years I’ve had the honour of working with Kate Mesta for various events from the Oscars Party at Paramount Studios in Los Angeles and of course the out of this world Los Angeles Portrait Photo Shoot that I did with UK model & actress; Jane Lavin, LA Fashion Week, Twilight actor Boo Boo Stewart and the Photo Shoot I did for Southern California band Darvoset.  So when I received a call from Kate’s publicist; Sondra that they wanted to hire me to capture the the latest photo shoot featuring world renown actress & musician; Ms. Brittany Curran – I immediately said yes!

Speaking of Brittany Curran, check out just this little bit about her:

She’s one of the premiere young actors in Hollywood today.  She’s began her film & television career on MADtv (LOVE IT!!!) along with feature film: “13 Going on 30” with Jennifer Garner, “Ghost Whisperer” with Jennifer Love Hewitt, “Shark” with James Woods and most recently as the daughter of Ray Romano on the critically acclaimed; “Men of a Certain Age.”

Yup – she’s rockin’ it in the industry!

The day of the photo shoot for Kate Mesta was awesome from the minute everyone showed up at Kate Mesta HQ.  We gathered our things together & you could totally feel the electricity building for the shoot.  After the Hummer, truck & Rio were packed up – we headed to Blow Salon & Spa in Laguna Beach where MEGA salon owners; Tracy & Paul along with their rockin’ staff styled everyone for the photo shoot.

Once everybody had their hair & makeup completed – we caravan’d to the sand in Laguna Beach where we met up with Sondra’s nephew; Indiana – who totally set up “Base Camp” on the beach for the photo shoot with a tent filled with product, beverages & treats.

The entire day for Kate Mesta’s photo shoot was a complete and perfect success with everyone’s awesome participation and the Kate Mesta “mascot” — Sondra’s vintage red Porsche!  I even shared a quick two minute sneak peek of the shoot on You Tube.  Here’s a LINK to it in case you missed it in the past couple of days.

Now before you scroll down to check the video out and you’re thinking… Hey – I’d really like to get to know this Orange County Photographer in Newport Beach (Previously a Huntington Beach Photographer) that loves music & romance, photography and art, feel free to contact me anytime.

I hope you’re having a great start to your weekend and stay tuned for some amazing events that I’m sharing.  From San Diego to Newport Beach, Ventura and all the way out to Berlin, Germany, London, England and Paris, France – I’ll have some fantastic Weddings, Lifestyle Photo Shoots and Events that I’ve had the honour of photographing – cheers!

PS, Be sure to keep up with me on social media!  I have a MEGA announcement about Esquire Photography being released that affects the my family’s photography business and little ole me personally.