What happens when you add celebrities, fire, magic and handcuffs? 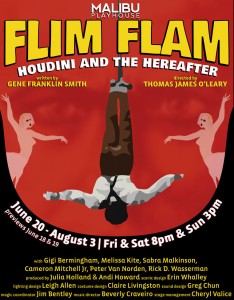 You have the SOLD OUT red carpet world premiere of “Flim Flam” written by Gene Franklin Smith at the Malibu Playhouse!

If Gene’s name sounds familiar it’s because I had the honour of working with him on “Skyfell (And I Can’t Get Up)” at The Toscars and then this weekend I was able to photograph his production of “Flim Flam Houdini And The Hereafter.”

Here’s a synapsis of “Flim Flam” –

“In the summer of 1922, Harry Houdini and Sir Arthur Conan Doyle team to investigate psychic mediums for the Scientific American committee.

Their friendship is challenged when Conan Doyle champions a beautiful and seductive psychic as authentic.

Houdini is determined to prove that she is a phony, until she appears to make contact with Houdini’s beloved dead mother, and he must confront his own beliefs about life-after-death.”

Plus!  “Flim Flam” features a star-studded cast with:

There was also fire, magic & props provided by Jimmy Bentley – who by the way totally looked like Frank Sinatra!

Before you scroll down to check out some of my favourite photos and Google Glass video clips from “Flim Flam” that received a roaring standing ovation in a film I put together and would like to chat with me about your event, feel free to contact me anytime.

PS, If you haven’t seen yet & are in or have been in the military – check out the EPIC Military Discount Program of 50% OFF.

« I love this awesome wedding tip for your bouquet to help you make the most out of your wedding day from my friend Shelly at simply bridalFrom Kilt To Camera – I’m Excited To Be Featured On Watch Hollywood TV! »