To quote Devo: “I’m a speed racer and I drive real fast!” Tony Is Helping Raise Money For The Polar Run For Ronald McDonald House in Minnesota! 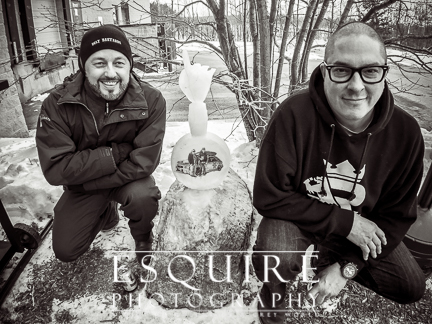 Have I got something personal, fun and totally MEGA for you tonight!  It’s my brother Tony & Diego’s promo video for the 2016 Polar Run in Minnesota.

CAN I SAY WHEW HEW!

As you’ve seen, 2016 is jamming out of the gate top speed for Esquire Photography.  I just dropped my new client: TEK Product’s 1st ever commercial that was ENTIRELY “#ShotOniPhone” with my Beastgrip.

Now – Tony asked me to donate my time to capture his fundraiser for The Polar Run, along with some of the fun he had with his friends in the garage.  If you’re not too familiar with The Polar Run, check this out:

“The rally is based on a points system. The team with the most points at the end of the rally will be named the winner.

Ways to earn points include (but are not limited to):
– Raise the most money for RMHC-UM with your team campaign.
– During the rally itself at checkpoints. See how below.
– Volunteering at RMHC-UM (option announcements will go out to teams after registration).

For the route, a series of checkpoints will be used. At each checkpoint, there will be varying levels of activities/challenges you can complete. The more difficult the task you decide to do (following the rules), the more points you will earn at that checkpoint.

Following the rally, teams will get to spend two (2) days hitting up the slopes and hanging out together.”

It’s so awesome the rally raises money for the Ronald McDonald House!  Just this year alone – The Polar Run has raised $20,000 for charity.  Which you guys know giving back to our friends, family & community is so important in today’s world.  Every little act of kindness is part of the “positive butterfly effect.”

I could totally go on & on about the guys prepping for the event, but I’ll wrap up my note & invite you to check out the MEGA video below that was entirely filmed and “#ShotOniPhone” with my Beastgrip & Rode Video Mic Pro of the fund raiser and Tony, Diego & they’re friends making some minor (and legal) modifications to his Smurf blue Subaru Crosstrek.  Which really shows some of the fun we had this week.

Also!  Thank you Tony for asking me to do this.  It was a total honour to help you guys prepare for your weekend!  :-)

PS, Choose 1080 HD so you can enjoy the riot of colours in “The Perfect Life”!

Sharing is Sexy like a John Cooper Works MINI Cooper or a Subaru (if you have to. LOL!)

« TEK Products In Minneapolis Minnesota Hired Me To Photograph, Film, Co-Produce, Edit, Direct, And A LOT More For Their 1st Ever Commercial!ROCK YOUR HAIR UNDER THE LEOPARD AWNING At Hi-Fi Hair And Records In Downtown Minneapolis! Filmed & Photographed By David Esquire »