ROCK YOUR HAIR UNDER THE LEOPARD AWNING At Hi-Fi Hair And Records In Downtown Minneapolis! Filmed & Photographed By David Esquire

“Where Music Is Fashion” ~ Jonny Z. 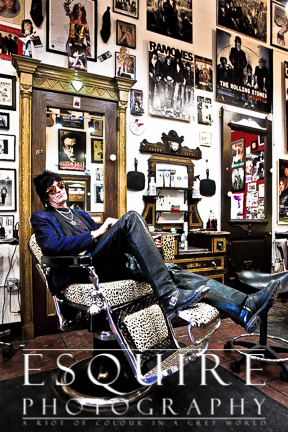 Good morning from EPHQ and have I got a totally awesome treat for you!

Have I got a totally awesome treat for you.  As you’ve seen, Esquire Photography has been going through some terrific changes over the past year.  From taking EPHQ on the road more often, to doing a LOT more filmmaking and commercial work.

Like the commercial I created, directed, edited, filmed & photographed for TEK Products ENTIRELY on my iPhone 6 Plus (aka: #shotoniphone) and my Beastgrip Pro (LOOK).  Not only was that an amazing experience, but Duran Rex told me that my commercial received a standing ovation at a conference from the company and word has it that… (something to share with you about it later).

Then there is my movie; “The Perfect Life” filmed entirely on my iPhone 6 Plus in Minneapolis AND with my Nokia 808 Pureview in Trier, Germany featuring the song: “The Perfect Life” by one of my all-time favourite artists: Moby (LOOK) and the promo video I did for my brother: Tony for him racing in The Polar Run helping raise more than $20,000 for the Ronald McDonald House (LOOK).

Well… last year, I did a totally MEGA film for DF Collections (LOOK) that was filmed at HiFi Hair And Records starring celebrity stylist: Jonny Z.  The film was a total success and what was even more awesome was the film echoing in Jonny’s & I’s creative brains – wanting to do more.

A little bit of time passed, Jonny and I had a couple ideas and then BOOM! like things always do – the ideas came together for a new video.

What Jonny was wondering was if we could create a shorter, more amp’d up video AND incorporate one of his favourite songs: “Can’t Help Being Myself” from his friends in the legendary Minneapolis band: The Phones.

If you’re not familiar with The Phones, check this out from their bio:

“Forming in 1979, the Phones released their first single “I’m So neat” b/w “She Said Goodbye in February of 1980 on their own label, Phone-O-Graph Records. A second single, “Suspended Animation” b/w “Kids Today” was released a year later.

In the Spring of 1981 the group recorded their first LP. The album, “Changing Minds” was picked up and released by Twin Tone Records in March of 1982 where it became one of their biggest sellers to date.  In 1983 they began work on their second Twin Tone record “Blind Impulse” which was released in early 1984 to rave reviews including one from Robert Palmer of the New York Times who called it, “Sheer Stylistic Originality” and gave it “Top Honors, this is a band to watch.“”

With all this awesomeness combined (and proper licensing) – I was able to create a “Director’s Edition” of the photo shoot into a shorter – even more energetic music video/commercial of Jonny at HiFi Hair and Records!

Before you scroll down to check out the totally MEGA video I filmed & photographed with my Canon DSLR, iPhone 6 Plus, Nokia Lumia 1020 AND Google Glass and would like to chat with me about photographing your fashion line or event, feel free to contact me anytime.

Also, remember when you go to HiFi Hair and Records in downtown Minneapolis – you’re in for a totally MEGA experience!  Jonny and his team are an analog, interactive collection of creative stylists, that combine the love of music, with killer hair services for men, women children, and everyone in between.  No pretense, no attitude, only loud and proud, good time rock and roll hair for your inner rock star!

“Getting your hair cut should be a social experience.  Come on in, plug some music into the jukebox, and have a good time.”

PS, I wanted to let you know that dancing is encouraged at HiFi Hair and Records.

PSS, Be sure to select 1080 HD for the video so you can enjoy all the awesomeness!

« To quote Devo: “I’m a speed racer and I drive real fast!” Tony Is Helping Raise Money For The Polar Run For Ronald McDonald House in Minnesota!I’m excited and honoured to share with you my Minneapolis client – TEK Products signed off on the proposal for the 2nd commercial! »