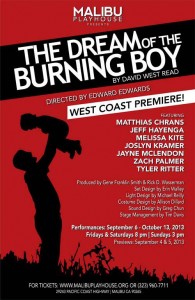 Good afternoon from EPHQ everyone!  As I’m sure you saw on my Facebook & Twitter updates on Friday night, I had the honour of working with Mr. Gene Franklin Smith, the Creative Director at the newly refurbished Malibu Playhouse as their event photographer for the SOLD OUT Red Carpet opening night of; “The Dream Of The Burning Boy” which Gene & Rick D. Wasserman produced.

This is the West Coast Premier directed by Edward Edwards, is getting 5-Star Rave Reviews and on top of that – had an industry who’s who guest list of Jerry Lacy, Julia Duffy, Jane Seymour, Roma Downey, and a totally MEGA cast including Matthias Chrans, Jeff Hayenga, Joslyn Kramer, Jayne McLendon, Zach Palmer, Tyler Ritter and of course – the incredible celebrity actress & designer: Ms. Melissa Kite.

Melissa I’m sure you remember I had the honour of photographing & filming in Los Angeles recently on my Canon DSLR, a Nokia 808 Pureview mobile phone AND my Google Glass with the musical track by one of my all time favourite artists: Moby (LINK).

Well, after photographing their event on Friday that had a standing ovation which erupted before the closing music of the performance – I just have to share some of my favourite photographs with you.

I hope you’re having a great week AND be sure to check out the contest (LINK) I’m hosting with Simply Bridal – where we’re giving away a FREE Wedding Dress.  PLUS!  The contest has been endorsed by the United States Marines AND Military Disney Tips!  WHEW HEW!