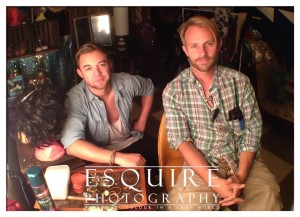 Good afternoon from Esquire Photography HQ everyone!  While I’m catching up on things after working as a 2nd Unit Director AND Set Photographer for the film: “Pepper” – I wanted to give you a sneak peek from the set of the movie with wrap videos from the Co-Directors: Marc Cleary and Craig Robert Young WITH surprise guest appearances from the star of the movie; Scott Kaske.

BUT FIRST – a few current events!  As I’m sure you’ve been keeping up on all the exciting events I’ve been sharing on Twitter & Facebook; from photographing Portraits, Red Carpet Events, commercial photo shoots with celebrities, I was recently chosen as a Google #GlassExplorer AND being invited to perform on stage in New York & Edinburgh, Scotland for the parody: Miserable Lesbians all the while kicking off the EPIC Military Discount Program.

All the things are going on & then I was invited by my friend & fellow Toscar Alumni: Gene Franklin Smith to photograph the Red Carpet event of the SOLD OUT play: “Blood Knot” directed by actor: Louis Gossett Jr. at the Malibu Playhouse.  Can you say: WHEW HEW!

Ok – back to some of the fun we had over the past week filming the movie: “Pepper” in and around Los Angeles.

There aren’t enough words to describe how amazing the experience was for me.  On the 2nd day of filming one of the most powerful scenes in the movie, I shared with Marc Cleary that I needed to thank him for making me cry inside while I was shooting.  The movie; “Pepper” is a totally inspiring film about love & acceptance and I know when you see it – you’ll absolutely agree.

Now before you scroll down & check out the wrap videos AND PHOTO BOMBING and you’re wanting to chat with me about a project or film you’re working on, totally feel free to share your thoughts in the comments below or contact me anytime day or night.  I’m available just about 24/7 via Twitter, Facebook, Google+, the form on my contact page, or the old fashioned phone as well at 888.ESQ.PHTO (888.377.7486) or 562.225.5915.

I hope you’re having a great start to your weekend and stay tuned for more amazing events that I’m sharing from Newport Beach, all the way out to London, Paris, Costa Rica, Germany and Switzerland.

DAY ONE WRAP VIDEO ON THE SET OF THE MOVIE “PEPPER”

“SMELL-O-VISION” ON THE SET OF THE MOVIE “PEPPER”

DAY TWO WRAP VIDEO ON THE SET OF THE MOVIE “PEPPER”

SCOTT KASKE’S THOUGHTS ON THE SET OF THE MOVIE “PEPPER”