I’ve Been Asked To Join The Cast Of The Award Winning Miserable Lesbians Comedy Musical And Perform In New York & Edinburgh, Scotland! 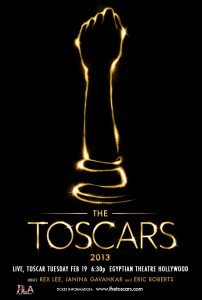 Good evening from EPHQ everyone!  I’m one international photographer who’s MEGA excited to share that I’ve been asked to be on the cast of the…

Do you think you can handle it????

The AWARD WINNING Comedy Musical “Miserable Lesbians” which swept the 2013 The Toscars hosted by Brits in LA.

AND more recently – getting hired as Director of Photography & Actor for a movie with “The Token Minorities” comedy troop, being the Set Photographer AND as an Actor on the award winning movie; “Skyfell (And I Can’t Get Up)” for The Toscars & photographing the John B Concert all the while kicking off the EPIC Military Discount Program, AND landing two new sponsors that I’m about to share with you soon.

As I’m sure you saw, the movie: “Skyfell (And I Can’t Get Up) received a TON of Nominations for several awards and on top of that – The Toscars have been shared all around the world through various media organizations like the BBC, Globe Telegraph and London Flair PR.

Now I get to go on the road with my friend: Sandro Monetti & perform on stage as an actor, dancer & singer on July 28th at 59E59 Theatre (between Madison & Park) in FREAKIN New York City  * AND * on August 17th at The Merchants’ Hall (Off Princes Street) in Edinburgh, Scotland.

Can I just stand up out of my chair & say: YES AND WHOLLY NACHOS & NEWCASTLES!!!!

I hope you’re having a great start to your Daylight Savings and stay tuned for more amazing events that I’m sharing from Newport Beach, all the way out to London, Paris, Denise & Miguel’s Wedding in Costa Rica, Germany and Switzerland.

PS, If you would like to order any professional prints from the award winning movie; Skyfell (And I Can’t Get Up), email me because I’ll have a Private Gallery at my partner vendor: Pictage AND I’m running a two-for-one promotion on professional prints too.

PSS, Be sure to check out the Award Winning film of “Miserable Lesbians” that swept this year’s The Toscars hosted by Brits in LA and select the options on the video below so you can enjoy it in HD!

« FREE iPhone & iPad App To Help You Make Wedding Planning EasierI Am One Newport Beach Photographer Who Had The Opportunity To Photograph Professional Actor: Matt Crabtree In Los Angeles »