I’m One Mega Honoured Photographer Who Got To Photograph Uber UK DJ; John B At The Dragonfly LA 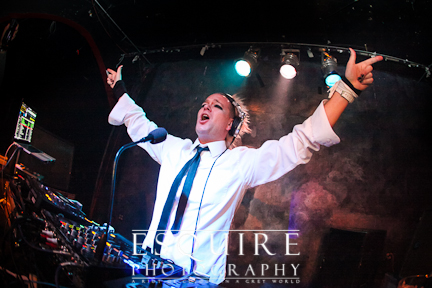 Good morning & “Happy New Beer” (like my brother; Tony says) from EPHQ everyone!  I’m one Newport Beach Photographer who’s been dying to share with you UK DJ John B‘s RESPECT performance last week at The Dragonfly in Los Angeles.

As you’ve seen from all the awesomeness on Twitter & Facebook – 2012 was bursting at the seams with Portraits, Engagement Shoots, Weddings, Red Carpet Events, two commercial photo shoots for celebrity designer; Kate Mesta featuring Boo Boo Stewart AND Brittany Curran, the TV program; “Picture Me – Picture You“ filmed around the world entirely on a mobile phone AND being voted in the TOP 3 as OC’s BEST Wedding Photographer.  It was a really amazing 2012!

What’s really awesome is 2013 is off to very much the same start with John B!

I’ve been following John B for numerous years and very heavily since John’s “Electrostep” album came out back in 2006.  John B’s personality was screaming volumes on the album cover – which totally matched his musical style.  Especially in some of my favourite songs like: “Fashion”, “Stalking You On My Space” and “Tainted Love.”

If you’re not too familiar with John B, check out these excerpts from his absolutely incredible Bio:

British super producer John B has known for ages what Lady Gaga is only just discovering:  the importance of pushing boundaries with a well-manicured hand.

Defying categorisation, John’s catalogue straddles electro, punk rock, trance, Latin and drum and bass. The euphoric ‘Up All Night’ became the defining track on Mixmag’s Trance and Bass compilation in 2003 and was quickly followed by a commission for Oakenfold’s Perfecto imprint, which appeared on the epic ‘Great Wall’ compilation alongside the likes of Madonna and Justin Timberlake.

His referencing of colourful counter-cultures such as fetish, euro pop, burlesque, street fashion and the avant garde, have brought him into the orbits of electrohouse scene favourites such as Larry Tee, Mark Moore and Tommie Sunshine, who were all champions of John’s Electrostep album. And his electro friendships don’t end there.  He’s done remixes for Heaven 17, Howard Jones, My Robot Friend, and S’Express.

And by creating exclusive free content he’s been able to amass a hugely loyal global following. His live sets and studio mixes regularly exceed 100,000 downloads and, as his podcasts near their 100th episode they’ve hit the itunes top 10 too.

Can I just quote my favourite actor; Keanu Reeves and say; “WHOA!”  …And, those are just just a few bits from his bio.  Click on this LINK so you can connect with John B through his podcast, photos, videos, social media and so much more.  When you connect with John B, you’ll see why I’ve been following him for years.

To be even more blunt, John is in my top three artists that I respect and am inspired by.  The three being; Duran Duran who I’ve been following since 1982 & had the honour of working with several times, John B since 2006 and now had the honour of working & hanging with (WHEW HEW!), and Robbie Williams – who’s been on the radar and am aiming to meet and work with in 2013.

One of the many things that’s totally awesome about John B is that he’s personal, approachable and super cool.  I’ve worked with tons of recording artists & DJs in my career, but John B totally hung out with his fans & friends before and after the event.  Now THAT is truly sets him apart from so many professionals today.

Then sit back, turn up the volume and check out John B’s MEGA video below.  OH!  By the way!  You’ll recognize the song in the video too.  It’s; “Up All Night (Epic Mix)” from John B.’s “Up All Night” maxi single that John was totally cool in letting me use.  It’s one of my favourite songs of his & I thought it was a perfect match for the video since we were all pretty much “Up All Night!”

And now… a few words from John after his MEGA performance.  I dig it how he’s on point even after rockin The Dragonfly!

Now that you have an idea of the many things going on and if you’re thinking…  Hey – I’d really like to get to know this international photographer who loves music & fashion, photography and art, feel free to contact me anytime.

I hope you’re having a great start to your New Year and stay tuned for more amazing events that I’m sharing.  From San Diego to Newport Beach, all the way out to London, Paris, Costa Rica, Germany and Switzerland.