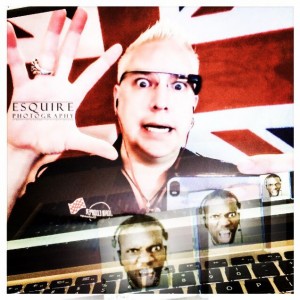 Good afternoon from EPHQ everyone!

I’m sure you’ve been seeing on Facebook & Twitter, things have been pretty wild & crazy.  I’ve been interviewed for a magazine in Italy, a magazine in France and I was filmed in Hollywood & at The Lexington Social House in Los Angeles for a teaser/trailer of an entertainment program with WatchHollywood.TV that I’m being featured on.  Check out some fun behind the scenes photos from the shoot HERE!

Well in the middle of all that, along with editing nearly 10,000 photos from Shriradha & David’s destination wedding in India, and sharing Ashley & Peter’s epic Engagement Shoot in Huntington Beach – my friend & professional Canadian photographer Olivier Day got together to record another installment on How To Make The Most Out Of Your Photography Business.

As you can tell from the photo to the right, we had a totally MEGA time recording this episode.  Plus!  I’ve been getting my nutrition back in line and was able to fit into one of my favourite MINI Cooper racing shirts.  YAY!

Some of the topics we covered were:

Before you scroll down to check out the video we recorded and you’re thinking…  Hey – I’d really like to get to know this Newport Beach Photographer & Google Glass Explorer who loves the arts, feel free to contact me anytime.  I’m available just about 24/7 via Twitter, Facebook, Google+, the form on my contact page, or the old fashioned phone as well at 888.ESQ.PHTO (888.377.7486) or 562.225.5915.

PS, I hope you’re having a great weekend AND totally check out the not one – but TWO WINNERS of the Military Contest – giving away a FREE WEDDING DRESS from Simply Bridal.  Here’s the LINK to enjoy the video announcement.

PSS, Also, if you’re in or have been in the military – check out the EPIC Military Discount Program of 50% OFF.

MEGA PS, Stay tuned for the announcement of me being featured on ABC, CBS, FOX & NBC!

« How To Make The Most Out Of Your Wedding Day With Simply Bridal & Newport Beach Wedding Photographer David Esquire At Esquire PhotographyI’m One Google Glass Explorer Excited To Share I Was Interviewed On This Week In Google Glass! »