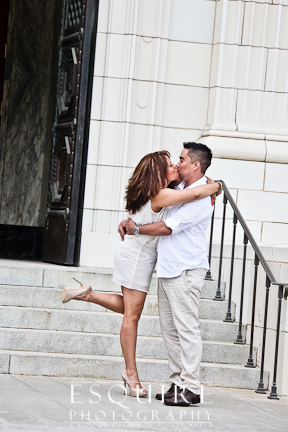 Good evening from Esquire Photography HQ everyone!  As I’m sure you’ve been keeping up on all the exciting events I’ve been sharing on Twitter & Facebook – I was recently chosen as a Google #GlassExplorer AND being invited to perform on stage in New York & Edinburgh, Scotland for the parody: Miserable Lesbians all the while kicking off the EPIC Military Discount Program.

On top of all those awesome events happening, I just had the opportunity to meet up with Liz & Rick for their totally romantic Engagement Photo Shoot up in Downtown Ventura.

I first had the opportunity of meeting them at a Bridal Faire that Reverend Sandra & Brooke from Visions & Promises held and knew from the minute we met – we all connected.  So when they decided on a location for their Engagement Photo Shoot – I couldn’t wait to drive up to Ventura to work with them.

We met up at Grant Park at the top of the hill overlooking the beach, Ventura Pier, and downtown – which was a perfect starting point for their Engagement Photo Shoot.  I was able to capture some relaxed & fun portraits with terrific views of Downtown, the Father Serra Cross – which is over 200 years old and we even captured some fun portraits of their table numbers.

Oh!  I need to mention that yesterday was “Star Wars Day / May The 4th Be With You Day” – which gave Liz & Rick to do some “Vadering” in their shoot too!

We eventually headed down the hill to Ventura’s historical City Hall building where I was able to capture some of my Signature Night Romantic Portraits of Liz & Rick.  Which they totally rocked!

Before you scroll down & check out the video I put together with some of my favourites from their Engagement Photo Shoot in Downtown Ventura and you’re wanting to chat with me about a event or wedding, totally feel free to share your thoughts in the comments below or contact me anytime day or night.

I hope you’re having a great “Sink O de Mayo” and stay tuned for more amazing events that I’m sharing from Newport Beach, all the way out to London, Paris, Germany and Switzerland.

« I Had An Hour To Myself In Hollywood Before My Miserable Lesbians Vocal Lesson & Had Some Fun Doing Some Street Photos With My LeicaGuest Writer: Marc Lindshield Shares Some Amazing & Inspirational Thoughts To Help You With Your Week »