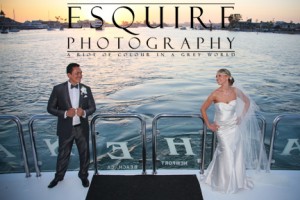 As I’m sure you’ve seen from all the awesomeness on Twitter & Facebook – quite a bit has been happening at Esquire Photography HQ with Portraits, Engagement Shoots, Weddings, Red Carpet Events, getting hired on as a Director of Photography AND Co-Director with Markus Redmond on the upcoming movie; “Here & Now”starring Jasper Cole & Bobbie Phillips, along with two shoots for celebrity designer; Kate Mesta featuring Boo Boo Stewart AND Brittany Curran and the TV program I spent two weeks in Germany & Switzerland filming the first episodes of; “Picture Me – Picture You“ filmed entirely on a mobile phone.  It’s been quite a year!

Now back to the awesome wedding I’m sharing with you over a yummy cup of coffee!  :-)

If Indre & Pele sound familiar to you, it’s because I recently had the honour of photographing their Engagement Shoot at my Secret Spot somewhere in Southern California.  I knew from the minute we were all working together for their Engagement Shoot, we would have a blast on their wedding day.

And… well… I was totally right!

Indre & Pele shared their very intimate wedding with some of their closest friends & family in the Newport Beach Harbour on the Athena yacht with Electra Cruises.  From the minute Indre stepped out in her shoes by Marinelli and her Wedding Dress from Here Comes The Bride adorned with Swarovski jewelry and a lovely perfume called “Chance” by Chanel.

Indre & Pele’s sunset wedding ceremony aboard the Athena yacht was filled with tears of joy and a wedding reception that rocked through the night with DJ Von from DVS, Mobile DJ Service.  From the Garter & Bouquet Toss to the delicate cake cutting and group photo that I instigated with everyone on the back of the yacht and a few of my Signature Night Romantic portraits with Indre & Pele under the moon-lit sky.  It was an absolutely perfect Wedding day!

I would like to say thanks to Cat, the Banquet Manager aboard the Athena yacht.  She led an army of awesome professionals that I seriously am eager to work with again.

Ok… Now that you have an idea of the fun we all had during on Indre & Pele’s wedding day in Newport Beach on the harbour and if you’re thinking…  Hey – I’d really like to get to know this Newport Beach Photographer (Previously a Huntington Beach Photographer) who loves music & fashion, photography and art, feel free to contact me anytime.

I hope you’re having a great weekend and stay tuned for more amazing events that I’m sharing.  From San Diego to Newport Beach, Ventura, all the way out to London, England, Paris, France, Germany and Switzerland – I’ll have some fantastic Weddings, portrait shoots and soon – “Picture Me – Picture You” that I’ve had the honour of photographing & filming.

PS, I love this quote from the Apple ad “The Crazy Ones” back in the 80’s. “The ones who are crazy enough to think they can change the world, are the ones that do.”  I totally believe this & am happy to know other awesome people who feel the same way.