I Had The Honour Of Photographing “Blood Knot” Directed By Louis Gossett Jr. At The Malibu Playhouse For Toscars Client Gene Franklin Smith 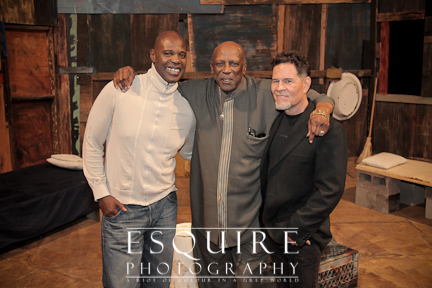 Good afternoon from EPHQ everyone!  What happens when you have a red carpet event in Malibu that invites celebrities from all around like: Dick Van Dyke & many more?  Well… I’ll share that with you in a moment.  :-)

But first a few current events!  As I’m sure you’ve been keeping up on all the exciting events I’ve been sharing on Twitter & Facebook; from photographing Portraits, Red Carpet Events, commercial photo shoots with celebrities, I was  recently hired as the Set Photographer AND as Actor on the movie; “Skyfell (And I Can’t Get Up)” for The Toscars hosted by Brits in LA, and the even more recent announcement I shared: being chosen as a Google #GlassExplorer & photographing the John B Concert all the while kicking off the EPIC Military Discount Program, AND being invited to perform on stage in New York & Edinburgh, Scotland for the parody: Miserable Lesbians.

On to today’s story!  Just about two weeks ago, I was invited by my friend & fellow Toscar Alumni: Gene Franklin Smith to photograph the Red Carpet event of the SOLD OUT play: “Blood Knot” directed by actor: Louis Gossett Jr. at the Malibu Playhouse (Formerly the Malibu Stage Company).  Can you say: WHEW HEW!

Last Friday was a totally amazing night.  From all the celebrities walking the red carpet like Dick Van Dyke, Joan Steiger, Shoshanna Kuttner and many more to the standing ovation and Q&A Louis Gossett Jr. hosted after the standing room only performance – it was a completely magical night.

What I also learned from Mr. Alton Patton who was there covering the event (with Jaquan Barnett from Beautiful Noize Entertainment) for ET’s “Face Time” that Louis Gossett Jr. had accepted the role of Zachariah Petersen back in 1964 replacing James Earl Jones.  As if that was not enough to get my jaw to drop, Louis Gossett Jr. has taken over the “Eracism Foundation“, dedicated to the idea of eliminating all sorts of racism in the hearts & minds of people.  What’s so amazing to me about that is I worked with the Eracisim Foundation back in the 90’s when I was photographing & touring with the XGames!

If you ever want to take a few hours out of your calendar & be totally moved with a theatre production – “Blood Knot” is a must see!

Before you scroll down to check out the video I put together with some of favourite photos & you have any questions or would like to chat about your event, be sure to share your thoughts in the comments below or contact me anytime day or night.  I’m available just about 24/7 via Twitter, Facebook, Google+, the form on my contact page, or the old fashioned phone as well at 888.ESQ.PHTO (888.377.7486) or 562.225.5915.

I hope you’re having a great week and stay tuned for more amazing events that I’m sharing from Newport Beach, all the way out to London, Paris, Costa Rica, Germany and Switzerland.

PS, If you would like to order any prints from the event, I have a private gallery on Pictage AND I’m running a 2 for 1 promotion right now too.

UBER PSS – I feel the need to share with you one of my favourite quotes from the movie: “The Replacements” starring Keanu Reeves & Gene Hackman: “Pain Heals, Chicks Dig Scars, Glory Lasts Forever.”